Hop-ing to get a head with new brew business! 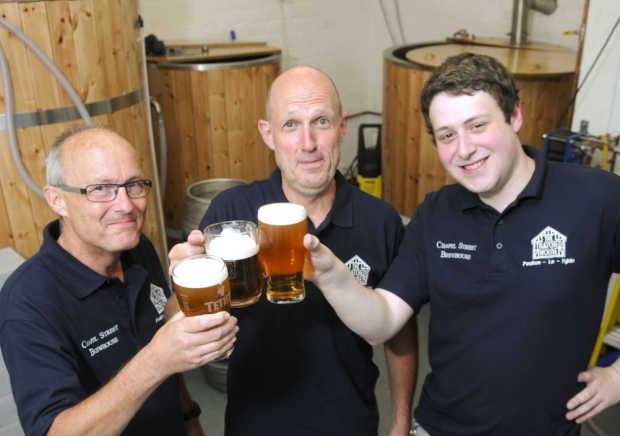 Drinkers raised a glass to the Fylde coast’s newest brewery as The Thatched House threw open the doors to the Chapel Street Brewhouse.

The project at the Poulton pub has been brewing for two-and-a-half years now, led by landlord Vin Hamer, who has run the Ball Street local for more than five years and long held ambitions to have his own brewery.

With help from bosses at Lytham Brewery, that dream has now been realised, seeing tanks installed in a brewery at the back of the premises – visible to regulars from the beer garden and open for all at the launch event on Wednesday evening.
Hundreds of regulars packed into the traditional pub to see the first pint poured and try a drink, or two, themselves.

Landlord Vin Hamer said: “It’s always been a dream of mine to have a brewery.

“This was the missing piece of the perfect pub jigsaw.

“It has been two-and-a-half years in the planning, plotting and designing. In my wildest dreams I didn’t expect anything like this crowd for the launch night.

“This pub will be the cask ale capital of the Fylde coast, now.”

And even those who aren’t fans of real ale can try its taste, with nearby Doodles Poulton Chippy, also on Ball Street, using the brew for its beer battered fish and chips recipe.

Regular Colin Clark, 58, from Blackpool, said: “Both ales are lovely, I think they’ll both be big sellers.”

And Jane Lynch, 42, from Poulton, usually a red wine fan, added: “It’s very nice, the Blonde. The Thatched has always been a traditional pub and renowned for doing a range of ales, so it’s nice they can do their own now, it’s quite unique. And it’s great for the town to have something new, too.”

Matt Mustow, 26, from Poulton, said: “I was a bit unsure with it being their first ale but it’s really good. This can only bring more people into the pub because it’s the only place that’s got it. It’ll enhance the reputation of the pub and of Poulton, too.”

The brewhouse now has the capacity to produce four barrels of real ale at a time, each with 144 gallons in, or 1,152 pints, and can put this out twice a week.

Bosses say around 50 per cent of the pub’s business comes from cask ale sales and the added appeal of a pub’s own brew, it is hoped, will only add to that.

“It’s a passion for a lot of our customers,” said Mr Hamer.

Raymond Jackson, a regional director for the Campaign for Real Ale (CAMRA) added: “This is a great asset for the local branch of CAMRA and the pub scene on the Fylde coast.”
http://www.blackpoolgazette.co.uk/news/community/community-news/hop-ing-to-get-a-head-with-new-brew-business-1-6710885