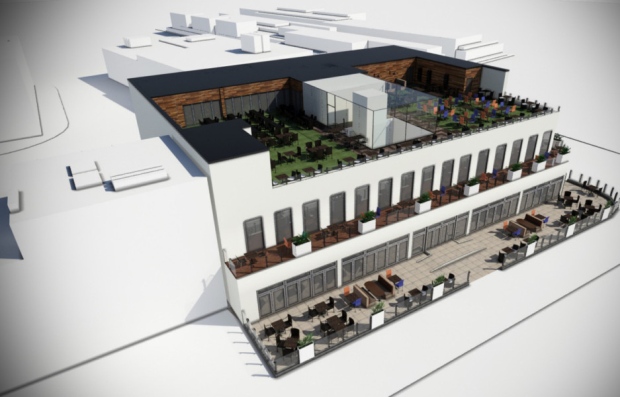 The Velvet Coaster is due to be opened by the Mayor of Blackpool, Coun Val Haynes, on Tuesday next week after its owners Wetherspoons spent £3.86m on a total reworking of the building.

Formerly the Lucky Star amusement arcade on New South Promenade, the pub, named after an historic ride at the Pleasure Beach by readers of The Gazette, will have three bars over three floors.

It is promising fun-fair themed decor throughout the interior with carpets and a fireplace area having ‘waltzer’ style designs.
Historical photos, details of local history, information relating to events, historical buildings and characters of the area, as well as artwork by local artists, will also be on display.

The pub will be open from 8am until midnight seven days a week, which means a large number of staff will be needed to cover all the shifts and resulting in bumper job opportunities.

Rebecca White, who was previously at Wetherspoons’ The Albert and The Lion, will be manager of the pub.

She said: “Me and my team are looking forward to  welcoming customers into the pub and we are confident that it will be a great  addition to the Blackpool community.”

She said the Velvet Coaster will specialise in real ales, as well as craft and world beers, serving a wide range of different draught ales, as well as bottled beers, including those from local and regional brewers.

“It will be open for family dining, with children, accompanied by an adult, welcome in the pub up until 10pm, throughout the week.

“It will also be wheelchair accessible and have a specially-adapted toilet for people with disabilities.”

She said the pub will have a ground floor level beer garden to the front of the premises, where smoking will be permitted in a designated area, as well as a balcony terrace on the first floor and a roof garden and bar.

The name comes from a ride on the Pleasure Beach which dates back to the early 1900s.

Its open carriages, with velvet seats, climbed a white wooden structure before sweeping down humps and around curves on two circuits of the track.

It was rebuilt, in 1933, and was known simply as Roller Coaster, until 2010. It is now named Nickelodeon Streak.

The company already runs three pubs in Blackpool: The Auctioneer in Lytham Road, The Albert and The Lion in Bank Hey Street and The Layton Rakes in Market Street.