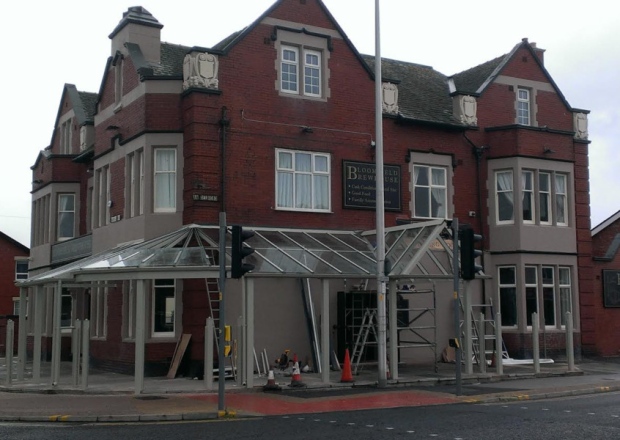 19:00 Wednesday 12 August 2015
A South Shore pub traditionally popular with Blackpool FC fans is set to re-open next week following a £500,000 investment.The Bloomfield on Ansdell Road, which has had a chequered past in recent times, is due to re-open on Friday August 21 after it was bought by the Manchester-based Dorbiere Pub Group.The independent company, which already owns the Boars Head on Preston Old Road, Marton, has rebranded the hostelry the Bloomfield Brewhouse and Barbecue.

It will boast cask ales, craft beers and even its own signature ale from an on-site brewhouse.

Dorbiere project manager Anne Brooks said: “We are very excited about this development.

“We believe Blackpool deserves a venue like this – a top-quality, good value approach to dining and socialising with an innovative twist.”

The exterior and interior is being transformed but a mural of Seasiders star Stanley Matthews will remain, and is being restored by the original artist.

A glass canopy is being added so customers can eat and drink outside.

The Bloomfield went under the hammer in February last year, with bidding starting at £140,000 for the three-storey building.

The venue was one of the first buildings to receive special protection from Blackpool Council’s heritage chiefs to preserve its history.

It is on the local list aimed at protecting much-loved buildings from inappropriate development.

Coun David Owen, who represents Victoria ward which includes the Bloomfield, said: “The Bloomfield pub has always been very much at the centre of the community.

“While it has had chequered times in the recent past, it is a substantial property and always part of the recreational offer in the area.

“It is clearly good news that a much smaller organisation has it, is prepared to invest on this scale and that it is likely to be a real asset for people who live in the vicinity.

”I look forward to having a pint there. Perhaps one of the new brews could be called Victoria ale.”

A spokesman for Dorbiere added: “This was once one of the busiest pubs within Blackpool, but in recent years it has somewhat seen a slump in its popularity.

“Dorbiere is hoping with the heavy investment, it will breathe life back into this famous old pub.”