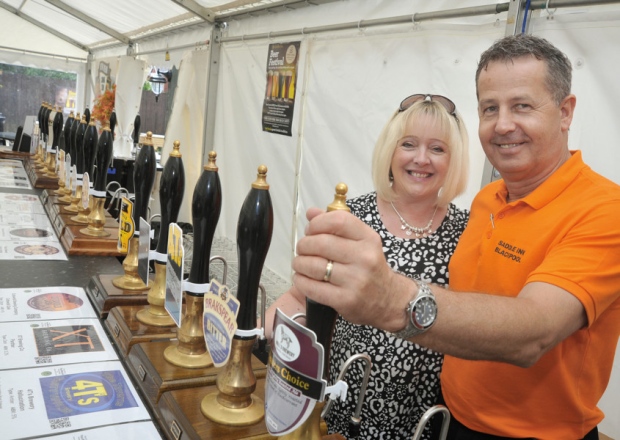 11:28Tuesday 25 August 2015Ale aficionados enjoyed a treat in the company of old friends at a Blackpool beer festival.

Regulars at the Saddle Inn got to meet former landlord and landlady Don and Pam Ashton who opened the proceedings by pulling the first pints.

On offer were more than 50 real ales and ciders from all over the UK at the Whitegate Drive pub.

Don and Pam were mine hosts at the pub throughout the 1990s and present landlord Andy Rogers said many of the regulars from their time were still customers.

He said: “Don and Pam were very popular and were well known for keeping the beer well.

“When we brought back the beer festival last year after I came to the Saddle I wanted to have them open the festival.

“This year they were able to do that and it was great to see them again. Some of the older regulars were pleased to see them.”

Among the beers on offer were many from the local area.

A selection of ales from the Lytham Brewery were available and some from Fuzzy Ducks in Poulton. Entertainment on the Friday and Saturday nights was provided by one of the regulars Ryan with his acoustic guitar and by Don Cochrane from new Blackpool band Fubar.

Andy said: “Thursday was a brilliant day weather wise and brought in lots of people, Friday and Saturday were also extremely busy.

“We had a marquee attached to the pub, which was just as well given the terrible weather on Sunday. The rain meant the barbecue had to be called off but we had Cumberland sausage and black-pudding hot pot instead.

“The ciders were the most popular this year and the feedback we got from customers was fantastic. We are all looking forward to next year’s.”